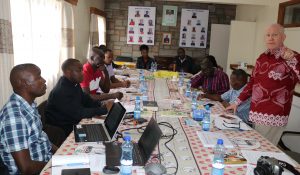 A Catholic lay woman in a Small Christian Community (referred to as SCC) in Our Lady of Guadalupe Parish in Nairobi Archdiocese, Kenya said: “In our traditional African family and society we women are second class. This is reinforced by patriarchal African customs. In our hierarchical, clerical Catholic Church we women feel at the bottom. But in our weekly SCCs as we sit around in a circle and read and reflect on the Gospel of the following Sunday, we feel that we women are equals and have a voice.”

This story illustrates how the SCC Model of Church is bringing about change and transformation towards equality and social justice.

A New Way of Thinking About and Living Justice and Peace

In addition to our traditional ways of thinking about justice, we have a new vocabulary  connected to integral ecology (especially the vision of Pope Francis in Laudato Si’) and the environment: “climate justice.” Climate justice is a term used for framing global warming as an ethical and political issue, rather than one that is purely environmental or physical in 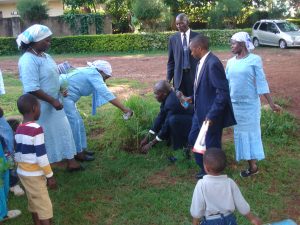 Lay members of St. Kizito Small Christian Community (SCC) water a seedling in the Waruku section of Nairobi, Kenya in East Africa during a Tree Planting Activity as part of the annual Kenyan Lenten Campaign.

In addition to our traditional ways of thinking about peace, we can think outside the box. Many people were surprised when Wangari Maathai won the 2004 Nobel Peace Prize. They asked, “what does this have to do with peace?” Maathai, a renowned Kenyan social, environmental and political activist and the founder of the Green Belt Movement, promoted planting of millions of trees to help bring peace and security.

St. Kizito SCC is located in Waruku, an informal settlement area in St. Austin’s Parish in Nairobi Archdiocese. SCC members are concerned about their environment. Tree planting and collecting garbage and trash have been part of their action projects during the annual Kenyan Lenten Campaigns.

Case Studies on “How SCCs Promote Reconciliation, Justice and Peace in Eastern Africa”

The free, online Ebook Building the Church as Family of God: Evaluation of Small Christian Communities in Eastern Africa (https://smallchristiancommunities.org/building-the-church-as-family-of-god-evaluation-of-small-christian-communities-in-eastern-africa-2) has a full chapter on “How SCCs Promote Reconciliation, Justice and Peace in Eastern Africa.” Here are some Case Studies and examples:

To encourage the SCCs values of unity, teamwork and cooperation there is the famous Amharic (Ethiopia) proverb When spiders unite, they can tie up a lion. Another version is Enough spider webs wound together can stop a lion. The Amara Ethnic Group in Addis Ababa and other parts of Ethiopia use this proverb in many different situations to emphasize the value, importance, power and strength of unity. Individually a person is weak, but working together people are very strong.  For example, if ordinary people work together they can overcome an unpopular leader like a dictator.

In April, 2008 with the elders (both men and women) present, there was a week of mediation on the parish and outstation levels of the families of the two ethnic groups concerned that had intermarried over the years. On the last day seven SCCs gathered to participate in a forgiveness and reconciliation ceremony. Prayers were said by each ethnic group. As part of the compensation and restorative justice, the Kalenjins rebuilt the houses and returned the cattle of the Kikuyu as a fine for their original wrongdoing.

Then nine months later in 2009 there was a special Reconciliation Mass with prayers in both the Kalenjin and Gikuyu languages.  Everyone in the SCCs participated in a communal meal of reconciliation with both Kalenjin and Kikuyu food served and eaten by the whole community. Everyone agreed that this violence and wrongdoing should never happen again. Until today (December, 2019) the peace continues and the local people are forgetting the past disputes.

The Small Christian Community Facebook Page (https://www.facebook.com/www.smallchristiancommunities.org) posed this question: People are asking how Small Christian Communities (SCCs) can actively participate in the current anti-corruption campaign in Kenya? Please give you answers here especially practical, on the grassroots, examples. Some online responses:

After a great deal of research and consultation we have determined that the four essential characteristics of the SCC Model of Church in Eastern Africa are:

These four characteristics are in the context of SCCs being a way of life, not just a program or project in the parish. They interact with justice and peace priorities. The Bible Reflection connects the Gospel to daily life. The Parish Justice and Peace Committees are composed of representatives from the SCCs. Practical action and outreach is not just devotional, but includes putting into practice the famous recommendation of the 1971 Synod of Bishops: “Action on behalf of justice and participation in the transformation of the world fully appear to us as a constitutive dimension of preaching the Gospel.” Ongoing formation of SCC leaders and members includes training in Reconciliation, Justice and Peacemaking.

This article was published in the January-February 2020 issue of the New People Magazine.