A Marianist cyber community meets for the first time in Dublin, Ireland.

Meet me in Ireland
A Marianist cyber community meets for the first time in Dublin. 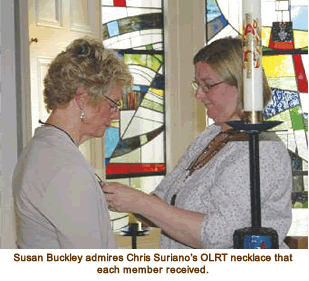 When the members of Our Lady of the Round Table, a five-year-old Marianist cyber community,gathered for the first time in Ireland in April, it was less an introduction than a family reunion. Although the members of the lay community are spread across four continents, the bonds of faith and community they share are strong. “We care about each other. We support each other. We do everything a community does except see each other,” says OLRT member Joanne McCracken from Medford, N.J. “That’s why going to Ireland was so important to us. It completed the picture.”

Birth of a cyber community

OLRT began in 2005 as an offshoot of a University of Dayton virtual online course sponsored by the North American Center for Marianist Studies. When the class ended, a number of participants continued to meet and pray together. They decided to practice Lectio Divina, a slow, contemplative praying of Scripture. Participants would lectronically post their prayers and reflections five days a week. The regular contact forged deeper friendships, and within a year the group decided to form an online community.

The community’s membership has changed slightly since its inception. Two members left the group, unable to maintain a daily commitment. A third, Marianist Brother Walter Oberster, died in 2006. Four new members were invited to join. Today, the community consists of nine women, all of whom are Lay Marianists. They come from the United States, Canada, Ireland, France, Kenya and Australia. They range in age from 41 to 73. Some have children, some have grandchildren, one is unmarried. Some have doctorates; others never completed their formal education. They represent every socioeconomic stratum. Diverse as the community may be, it is unified by the members’ shared faith and commitment to each other.

A sense of intimacy 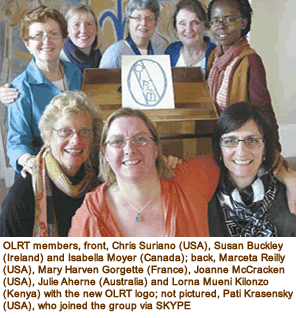 That commitment is strong. While most Marianist communities meet biweekly or monthly, OLRT meets every weekday. Although members can skip an occasional posting, they must let the rest of the community know if they won’t be posting for more than two consecutive days. That daily connection creates a sense of intimacy,” says community member Isabella Moyer, president of the International Organization of Marianist Lay Communities. Although “intimacy” isn’t a word often applied to e-mail, Moyer says that OLRT demonstrates the power of electronic communication as a communitybuilding resource.

“People think because something is online it’s going to be easy, but in some ways it takes more discipline,” says Moyer, who lives in Manitoba, Canada. “You can be physically present in a community that meets in your living room but not participate. You can sit there and soak it all in. But with an online community, people notice if you don’t post. You have to contribute.”

She likens the experience to physical exercise. “If you have to go running on your own it can be tough, but if you know someone is waiting for you on your doorstep, it motivates you. This community helps me with the daily discipline of prayer.”

In addition to Lectio, members pray for each other’s intentions. Christine Suriano, who lives in Palm City, Fla., says those prayers and the international nature of the group help her understand and appreciate her role in the broader global community. When a member prays for continued peace in Ireland or an end to the drought in Kenya, international issues that might seem like distant abstractions become real and immediate.“It helps you see the big picture,” she says.

Having openly shared their spiritual stories with each other nearly every day for five years, it’s no surprise the group’s first in-person meeting, which was hosted by the Marianist brothers at their home in Ballybrack County, Dublin, was a rich and joyous event.

“Seeing everybody didn’t make us any more a community because we were already such a strong community,” says Moyer. “Instead, it was a celebration and an affirmation.”

While prayer was a big part of the gathering — the group continued to practice Lectio and celebrated Eucharist with the brothers — the visit wasn’t a spiritual retreat in the traditional sense. “We know each other spiritually,” McCracken says. “That’s part of our daily lives. Ireland was about getting to know each other personally.”

In that spirit, the visit included plenty of sightseeing, shared meals and late night chats and, when it was all over, goodbyes were said without sadness or tears. After all, the members of the community were back together again — online — just a few days later.

Shelly Reese is a freelance writer from Cincinnati.

If you’re interested in setting up an online community,OLRT has created a guide based on its experience. Please
contact Joanne McCracken at maypoint@gmail.com for more information.