Altars of Hope in El Salvador in Times of COVID-19 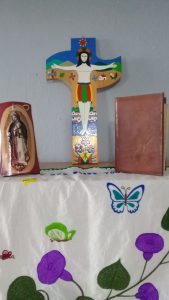 Who could have guessed that in less than a year after the synod for the Amazon, the world would be in the midst of a pandemic?  The longer quarantine stretches out in El Salvador (it began 21 March, 2020), the more I perceive the synod and COVID-19 are related stories.

Nayib Bukele, El Salvador’s president, addressed the nation on 6 April and spoke of dilapidated hospitals and how the country needs to revamp its health care system as quickly as possible due to  the COVID-19 outbreak.  He spoke of  equipment and supply shortages and of a health care system that has historically had low priority.

The truth is people with resources can get good health care here; it’s the poor and indigent (70 percent of the population) who suffer the brunt of grave injustice in medical attention. I’ve heard it said several times that what was normal before the virus will never again be normal after it. I hope so, at least on account for justice in health care, the environment, education, and so many other social emergencies.

A few days ago I went to visit Father Luis at our parish. He was wearing a white T-shirt and looked worried. We sat down at the kitchen table and he served me a glass of orange juice and poured himself a cup of coffee.  He told me he had just received a message from a friend who entered his National ID number into the government’s computerized subsidy system (which is distributing $300 to 1.5 million families to aid in buying food during quarantine).  The computer shot back: Order for Capture.  For Luis and his friend, who lived through regimens of exception during the Civil War (1980-1992), this was a frightening experience. The government now just imposed a regimen of exception on 14 March to give it tools needed to fight COVID-19.

On 21 March the president then imposed quarantine for 30 days (it has now been extended until 1 May). As necessary as quarantine is, one can’t help but question the authoritarian way in which it is being carried out.  More than 2000 people, who are not sick with the virus but who were simply on the streets without “good reason”, have been forcibly placed in government quarantine compounds (for 30 days) for violating the stay-at-home order. Stories of police and military abuse are surfacing almost daily now. Police demanded that one 19-year-old pay them $50 or he’d be taken into quarantine. He refused and police shot him in the legs.

Just the other day Aldo, from La Esperanza, who sells bread on the streets (bread vendors are allowed to sell during quarantine) was stopped by police because his plastic glove had a hole in it. He was frightened and feared being hauled off to quarantine; he was still shaking from the encounter when he arrived at my house (I buy bread from him most everyday).  He talked and talked and told me what’s happening is beyond the pandemic.  He also lived through the war and  the  “hole-in-the-glove” incident opened up past nightmares and traumas.

Last Wednesday, for the third time, the Supreme Court ordered the government to stop forced quarantine detentions as they are unconstitutional. The government refuses to comply and many now fear for El Salvador’s fragile, nascent democracy.

“People are tense,” Luiz said and took a sip of coffee. I mentioned how much it helps to follow mass on Facebook, and how nice it was that he and the Small Christian Base Communities organized the Altar Project — families making altars for each day of Holy Week (in their homes) and circulating pictures of them.  “La solidaridad no está en cuarentena,” Luiz quoted Pope Francis and said the offerings people gave (both monetary and food supplies that go to the neediest of our families) from the Altar Project were stronger than ever this year. “Those altars are the generosity of suffering humanity,” he said.

One of the most beautiful altars was of an empty, rustic cross with a white shroud draped over it; on one side of the cross was a photograph of Saint Óscar Romero and on the other side a photograph of Rutilio Grande. Written above the altar: CHRISTO HA RESUCITADO. It was constructed by a family that also earns their livelihood making bread.  After Holy Week, I thanked them for the altar, and the mother told me how much they miss taking communion together.

I also complimented Luis on his creativity at the Easter Vigil mass. Our parish held Easter masses — and continues to do so — in a church empty of parishioners because of restrictions to block the spread of COVID-19, yet masses are live streamed on social media.  Luiz asked people to take Holy Water (in their homes) and bless their children and family as he was doing with the small group of lectors in the church. “What a beautiful moment,” I said, and added how nice it would be to do the same with the Eucharist.  Father’s face went bright and a big “Si” jumped across the table.

“Families, with bread from their own homes, feeding one another the Body of Christ.  This virus doesn’t have to leave us in a Eucharistic Famine because of lockdown,” I imagined.

Luiz then invited me to afternoon mass and I gladly accepted.  A few of our computer, savvy youth (live streaming the celebration), were in the large church with us.  It was a joy to listen to the Word of God and take communion, but it was also sad knowing so much Eucharistic Hunger exists in the parish.

Yet this situation has increased our awareness and solidarity with our brothers and sisters in the Amazon. And the words of Maryknoll Father Joe Healey — who is based in Nairobi, Kenya and has written extensively on the Eucharistic Famine— came back to me.  He says that the Catholic Church should study and implement the recommendations of the Amazon Synod on married priests and women deacons. This includes giving lay people in our Small Christian Base Communities more administrative responsibilities in our parishes and outstations with more involvement in the sacraments.

Yes, the empty church that afternoon was lonely and the liturgy, as spiritually enriching as it was, didn’t fill that emptiness. But the Body of Christ transformed it into a space where dreams and hopes continue to grow.